The Sad Story of Masha and Dasha! 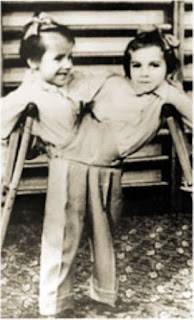 "On a frozen Moscow morning in January 1950, Siamese twins, Masha and Dasha Krivoshlyopova were born. The delivery was by caesarian section. On awakening from the anesthetic, the mother was told her babies had died shortly after birth. This was a blatant lie by the Soviet medical authorities. Instead, they took the girls away to a medical institute in the Moscow region and used them as guinea pigs in a curious human experiment.

Doctors coldly calculated that they had a lot to learn by studying “ischiogagus tripus” twins. The girls were joined at the spine at an angle of 180 degrees. Between them, they possessed four arms, three legs a separate small intestine but they shared the same colon and rectum. They had four kidneys but only one bladder along with a shared reproductive system. Their circulatory system was interconnected; they shared the same blood supply. They had separate spines. This meant the twins had their own Central Nervous System. This allowed them to experience individual emotions, which in turn produced two different personalities. They may have had to share a bladder, but they were two people in their own right!

The medical profession treated the girls appallingly, subjecting them to painful experiments. For example, they would stick needles in one twin and assess the other for reactions; or toss one into a tub of icy water and check the other’s body temperature. As the girls only had three legs it took them five years to figure out how to walk, and this they did with the aid of crutches. This hideous experiment did, however, produce some astonishing results that need to be common knowledge because they turn conventional medical thinking upside down. This information is kept back because vested interest decides what is secret and what is not!

Masha and Dasha shared the same circulation system. To understand the importance of this we need to turn the clock back more than 100 years. Louis Pasteur is trumpeted as the father of the germ theory. The notion bacteria cause disease has become the foundation stone of modern, medicine. Pasteur’s contemporary Bernard had a different view; he said germs flocked to the site as a signal disease existed. They were not the cause. To look for the reason, we need to examine the environment. Some say Pasteur changed his mind on his deathbed, claiming it was the territory and not the bug which was the cause of disease. However, it was by then too late. The germ theory had taken off; it was about to give rise to a billion plus dollar pharmaceutical industry.

The Russian experimenters on the Siamese twins found irrefutable evidence that Bernard was right and the germ theory wrong. The girls shared the same blood, but they did not get the same illnesses. During childhood one twin got measles and the other did not. How is that possible? Surely the same germs were shared by both of them and yet only one was affected. This phenomenon occurred repeatedly. One girl got a cold, and the other remained healthy. One got flu the other didn’t. Dasha was given to immune weakness, was right handed and short sighted. Her sister became a smoker, later developed a taste for alcohol, had higher blood pressure, enjoyed clear vision and was left handed. In reality, two different people shared the same blood supply.
How could this be? They had shared blood, had a common digestive, excretory, endocrine and skeletal system but did not go halves on the same illnesses. The key to understanding this lies in the fact they had separate nervous systems. They both experienced an individual emotional environment. This fitted into Bernard’s theory, which stated diseases are not caught by breathing in germs but come about by emotions that cause stress at the brain level thus weakening the system and provide a place where germs can live. A bacterium looks for its natural habitat which is abnormal tissue. The microbes are the result and not the cause and fulfill their real purpose which is to heal by breaking down illnesses.

As surgical procedures improved many doctors offered to split the girls, but they declined. On April 17th 2003, Dasha died of a heart attack. Even then Masha refused separation and died herself seventeen hours later. The time has come to recognize the wrongs done to these girls, and to acknowledge them in the role they played in relaying the truth. Truth that is still suppressed because of its threat to commercial interests. I wonder if the same problem occurs on the Spa soaked isle of Samui?"
This article first appeared in the Samui Gazette of March 21 st 2012
Posted by Alister at Saturday, March 24, 2012

I don't think doctors did wrong by taking the girls away; they wouldn't have survive otherwise. Also, in Russian "Krivoshlyopova" is plural feminine form of surname. If you want to state the fact that they were two different people, you should've used "Krivoshlyopovy" which is plural form.

I can assure you that organic food grown from aquaponics tastes as good as
veggies that you just grow in soil or get from your store.
I have always loved DIY and still have always kept fish when I first found out about aquaponics a few months ago I had to generate my own system.
Growing fish that could easily catch diseases and parasites may be disheartening.

This is fascinating! And very sad. I wonder id their mother ever learned what really happened. I too strongly beleive that germs and illness and disease is attracted to already abnormal or sick tissue

this is an incredible story, and goes a long way to support the work of Dr R G Hamer and his work, German New Medicine www.learninggnm.com

It is indeed only the work of Dr Ryke Geerd Hamer (German New Medicine) that explains how germs are part of 'biological emergency programs' and steered by the brain in order to remove cells which have been multiplying during a 'conflict active phase'. So germs are not 'attracted to already sick tissue', but become active during the second phase (the 'healing phase', after the conflict has been resolved) to remove extra cells no longer needed by the body. It's hard to explain German New Medicine to someone who's used to listen to the nonsense of traditional doctors who are only fighting germs and symptoms and still inject people with very poisonous chemicals - like the ones used in chemotherapy, which is pure madness. Just study it for yourself and reap the benefits of it, but please do it while you're still in good health and therefore haven't yet been caught up in the maze of our 'modern health care industry'. Good luck!

Wow, incxredible blog layout! How long have you been blogging for?you make blogging look easy.
The overall look of your site is great, as well as the content!

Youu really make it seem really eaqsy together with your presentation however I to find this matter to bee actually onne thing that I think
I might never understand. It seems too complex and vewry huge for me.
I am looking forward inn ykur nxt put up,
I will attempt to get the hang of it!

Amazing! This blog looks exactly like my old one! It's on a entirely different
topic but it has pretty much the same layout and design. Great choice of colors!

This piece of writing is genuinely a goid one it helps new the web people, whho are wishing foor blogging.

If you are going for est contents like me, simply visit this web paqge
every day since it gives feature contents, thanks

Thiss design iis steller! You obviously know how to keep a reader entertained.

Between your wit and your videos, I was almlst moved to start my own blog (well, almost...HaHa!) Wonderful job.
I really loved what you had to say, and more than that, how you
presented it. Too cool!

Hmm it looks like yoiur site ate myy first comment (it
was extremely long) so I guess I'll just sum it up what I
had written and say, I'm thoroughly enjoying your blog. I as well am an aspiring blog blogger but I'm still new to
everything. Do you have aany points for novice blog writers?
I'd genuinely appreciate it.

Hi everyone, it's my first ggo to see at this web page,and piece of writing is actually
fruitful for me, keep up posting these types of articles.

I think this is one of the most important information ffor me.
And i'm glad reading your article. But want to remark on few general things, The web site style
is perfect, the articles is really nice : D. Good job, cheers

I'm really inspired together with your writing skills as wdll as
with the structure for your weblog. Is that this a paid theme or did you customize it yourself?
Anywzy stay uup the nice hogh quality writing, itt is rare to see a great weblog like this one these
days..

Promote Your Page Too